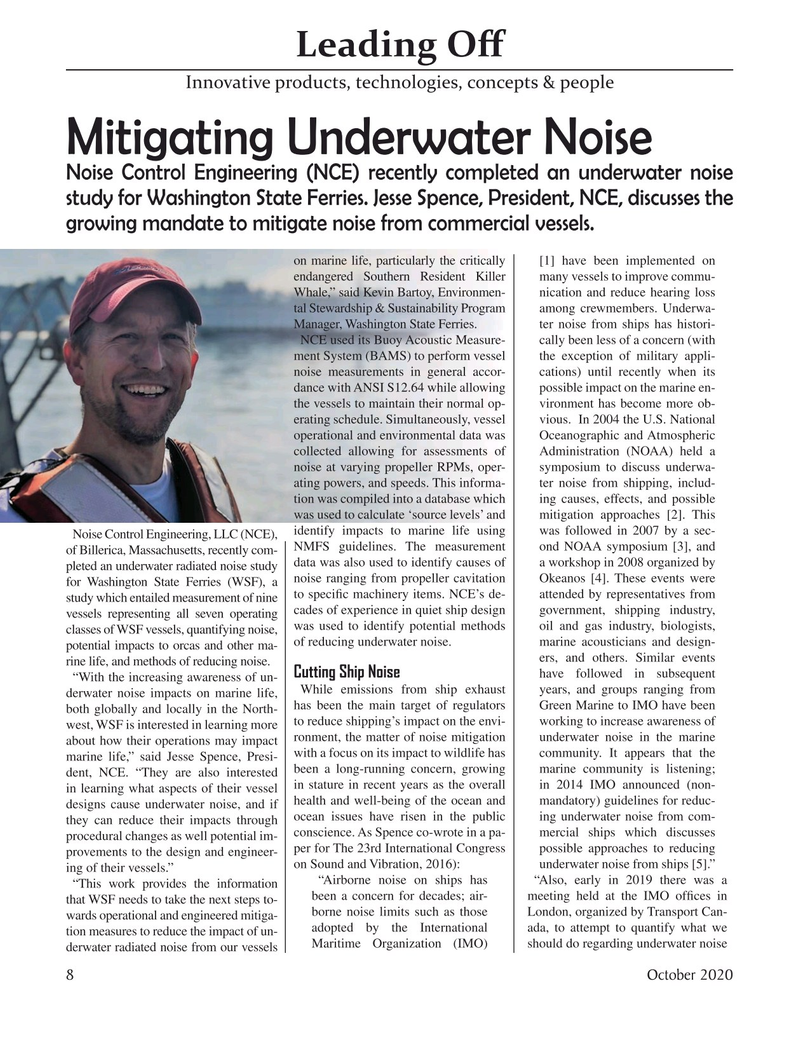 on marine life, particularly the critically [1] have been implemented on endangered Southern Resident Killer many vessels to improve commu-

NCE used its Buoy Acoustic Measure- cally been less of a concern (with ment System (BAMS) to perform vessel the exception of military appli- noise measurements in general accor- cations) until recently when its dance with ANSI S12.64 while allowing possible impact on the marine en- the vessels to maintain their normal op- vironment has become more ob- erating schedule. Simultaneously, vessel vious. In 2004 the U.S. National operational and environmental data was Oceanographic and Atmospheric collected allowing for assessments of Administration (NOAA) held a noise at varying propeller RPMs, oper- symposium to discuss underwa- ating powers, and speeds. This informa- ter noise from shipping, includ- tion was compiled into a database which ing causes, effects, and possible was used to calculate ‘source levels’ and mitigation approaches [2]. This identify impacts to marine life using was followed in 2007 by a sec-

While emissions from ship exhaust years, and groups ranging from derwater noise impacts on marine life, has been the main target of regulators Green Marine to IMO have been both globally and locally in the North- to reduce shipping’s impact on the envi- working to increase awareness of west, WSF is interested in learning more about how their operations may impact ronment, the matter of noise mitigation underwater noise in the marine with a focus on its impact to wildlife has community. It appears that the marine life,” said Jesse Spence, Presi- dent, NCE. “They are also interested been a long-running concern, growing marine community is listening; in learning what aspects of their vessel in stature in recent years as the overall in 2014 IMO announced (non- designs cause underwater noise, and if health and well-being of the ocean and mandatory) guidelines for reduc- they can reduce their impacts through ocean issues have risen in the public ing underwater noise from com- conscience. As Spence co-wrote in a pa- mercial ships which discusses procedural changes as well potential im- per for The 23rd International Congress possible approaches to reducing provements to the design and engineer- on Sound and Vibration, 2016): underwater noise from ships [5].” ing of their vessels.” “Airborne noise on ships has “Also, early in 2019 there was a “This work provides the information been a concern for decades; air- meeting held at the IMO of? ces in that WSF needs to take the next steps to- borne noise limits such as those London, organized by Transport Can- wards operational and engineered mitiga- adopted by the International ada, to attempt to quantify what we tion measures to reduce the impact of un-