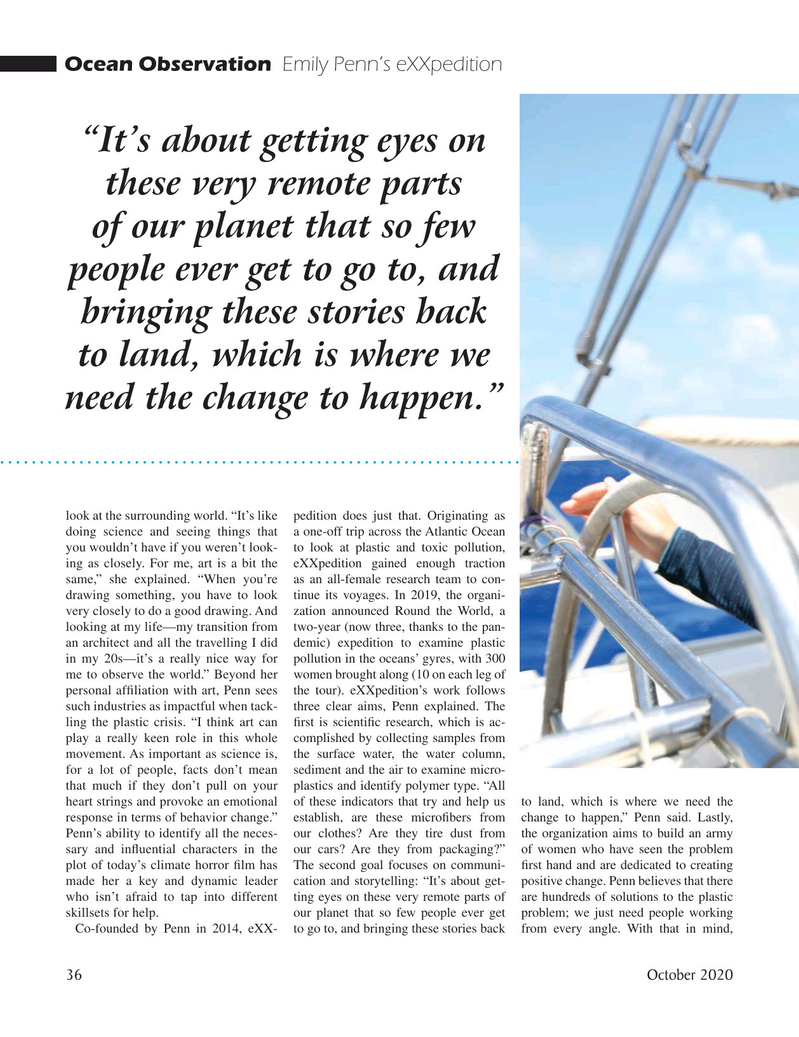 Ocean Observation Emily Penn’s eXXpedition “It’s about getting eyes on these very remote parts of our planet that so few people ever get to go to, and bringing these stories back to land, which is where we need the change to happen.” look at the surrounding world. “It’s like pedition does just that. Originating as doing science and seeing things that a one-off trip across the Atlantic Ocean you wouldn’t have if you weren’t look- to look at plastic and toxic pollution, ing as closely. For me, art is a bit the eXXpedition gained enough traction same,” she explained. “When you’re as an all-female research team to con- drawing something, you have to look tinue its voyages. In 2019, the organi- very closely to do a good drawing. And zation announced Round the World, a looking at my life—my transition from two-year (now three, thanks to the pan- an architect and all the travelling I did demic) expedition to examine plastic in my 20s—it’s a really nice way for pollution in the oceans’ gyres, with 300 me to observe the world.” Beyond her women brought along (10 on each leg of personal af? liation with art, Penn sees the tour). eXXpedition’s work follows such industries as impactful when tack- three clear aims, Penn explained. The ling the plastic crisis. “I think art can ? rst is scienti? c research, which is ac- play a really keen role in this whole complished by collecting samples from movement. As important as science is, the surface water, the water column, for a lot of people, facts don’t mean sediment and the air to examine micro- that much if they don’t pull on your plastics and identify polymer type. “All heart strings and provoke an emotional of these indicators that try and help us to land, which is where we need the response in terms of behavior change.” establish, are these micro? bers from change to happen,” Penn said. Lastly,

Penn’s ability to identify all the neces- our clothes? Are they tire dust from the organization aims to build an army sary and in? uential characters in the our cars? Are they from packaging?” of women who have seen the problem plot of today’s climate horror ? lm has The second goal focuses on communi- ? rst hand and are dedicated to creating made her a key and dynamic leader cation and storytelling: “It’s about get- positive change. Penn believes that there who isn’t afraid to tap into different ting eyes on these very remote parts of are hundreds of solutions to the plastic skillsets for help. our planet that so few people ever get problem; we just need people working