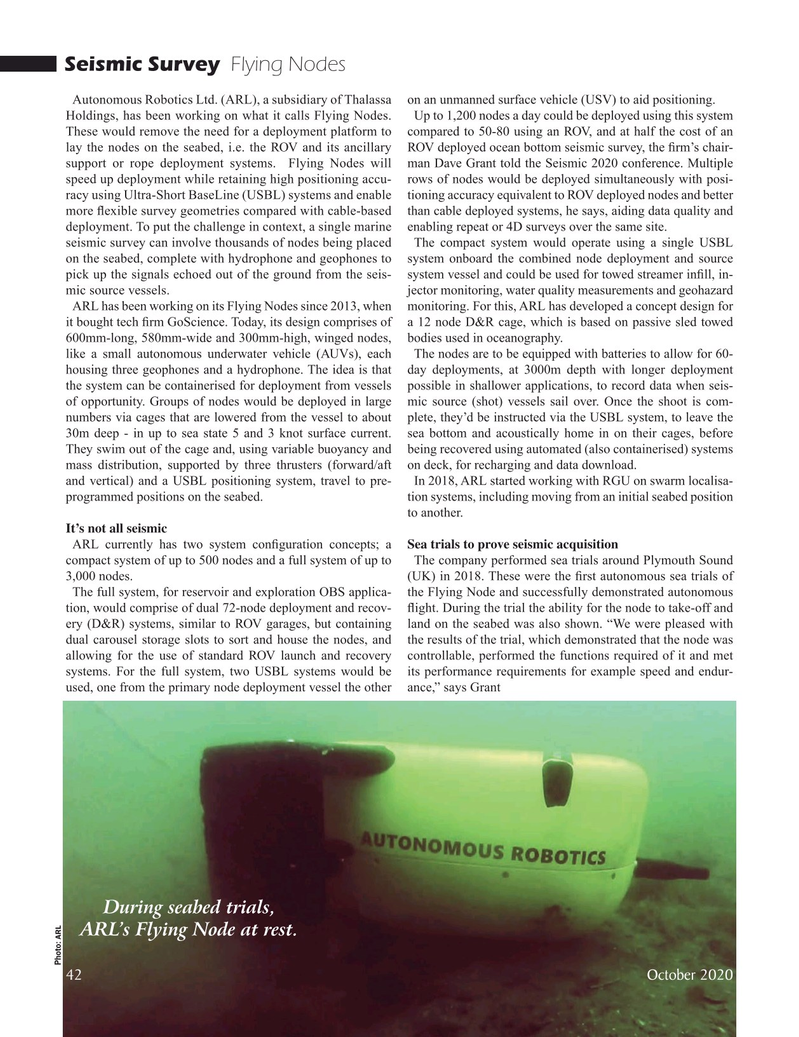 Holdings, has been working on what it calls Flying Nodes. Up to 1,200 nodes a day could be deployed using this system

These would remove the need for a deployment platform to compared to 50-80 using an ROV, and at half the cost of an lay the nodes on the seabed, i.e. the ROV and its ancillary ROV deployed ocean bottom seismic survey, the ? rm’s chair- support or rope deployment systems. Flying Nodes will man Dave Grant told the Seismic 2020 conference. Multiple speed up deployment while retaining high positioning accu- rows of nodes would be deployed simultaneously with posi- racy using Ultra-Short BaseLine (USBL) systems and enable tioning accuracy equivalent to ROV deployed nodes and better more ? exible survey geometries compared with cable-based than cable deployed systems, he says, aiding data quality and deployment. To put the challenge in context, a single marine enabling repeat or 4D surveys over the same site. seismic survey can involve thousands of nodes being placed The compact system would operate using a single USBL on the seabed, complete with hydrophone and geophones to system onboard the combined node deployment and source pick up the signals echoed out of the ground from the seis- system vessel and could be used for towed streamer in? ll, in- mic source vessels. jector monitoring, water quality measurements and geohazard

ARL has been working on its Flying Nodes since 2013, when monitoring. For this, ARL has developed a concept design for it bought tech ? rm GoScience. Today, its design comprises of a 12 node D&R cage, which is based on passive sled towed 600mm-long, 580mm-wide and 300mm-high, winged nodes, bodies used in oceanography.

like a small autonomous underwater vehicle (AUVs), each The nodes are to be equipped with batteries to allow for 60- housing three geophones and a hydrophone. The idea is that day deployments, at 3000m depth with longer deployment the system can be containerised for deployment from vessels possible in shallower applications, to record data when seis- of opportunity. Groups of nodes would be deployed in large mic source (shot) vessels sail over. Once the shoot is com- numbers via cages that are lowered from the vessel to about plete, they’d be instructed via the USBL system, to leave the 30m deep - in up to sea state 5 and 3 knot surface current. sea bottom and acoustically home in on their cages, before

They swim out of the cage and, using variable buoyancy and being recovered using automated (also containerised) systems mass distribution, supported by three thrusters (forward/aft on deck, for recharging and data download. and vertical) and a USBL positioning system, travel to pre- In 2018, ARL started working with RGU on swarm localisa- programmed positions on the seabed. tion systems, including moving from an initial seabed position to another.

It’s not all seismic

ARL currently has two system con? guration concepts; a Sea trials to prove seismic acquisition compact system of up to 500 nodes and a full system of up to The company performed sea trials around Plymouth Sound 3,000 nodes. (UK) in 2018. These were the ? rst autonomous sea trials of

The full system, for reservoir and exploration OBS applica- the Flying Node and successfully demonstrated autonomous tion, would comprise of dual 72-node deployment and recov- ? ight. During the trial the ability for the node to take-off and ery (D&R) systems, similar to ROV garages, but containing land on the seabed was also shown. “We were pleased with dual carousel storage slots to sort and house the nodes, and the results of the trial, which demonstrated that the node was allowing for the use of standard ROV launch and recovery controllable, performed the functions required of it and met systems. For the full system, two USBL systems would be its performance requirements for example speed and endur- used, one from the primary node deployment vessel the other ance,” says Grant