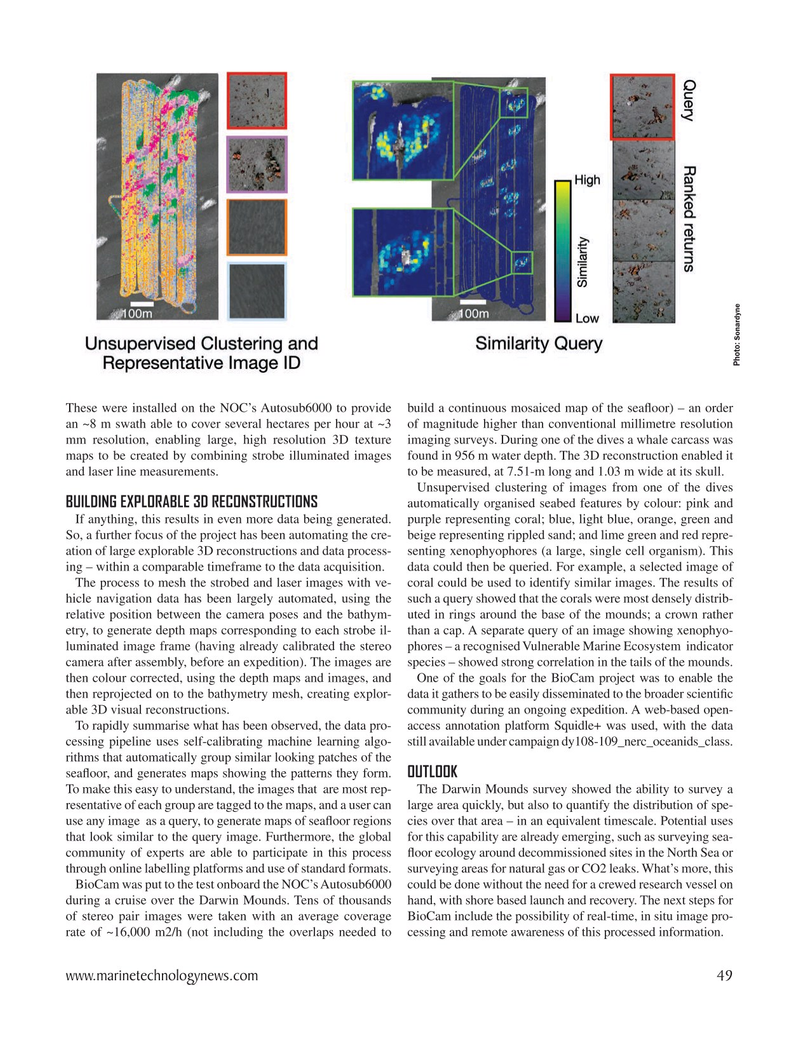 These were installed on the NOC’s Autosub6000 to provide build a continuous mosaiced map of the sea? oor) – an order an ~8 m swath able to cover several hectares per hour at ~3 of magnitude higher than conventional millimetre resolution mm resolution, enabling large, high resolution 3D texture imaging surveys. During one of the dives a whale carcass was maps to be created by combining strobe illuminated images found in 956 m water depth. The 3D reconstruction enabled it and laser line measurements. to be measured, at 7.51-m long and 1.03 m wide at its skull.

Unsupervised clustering of images from one of the dives

If anything, this results in even more data being generated. purple representing coral; blue, light blue, orange, green and

So, a further focus of the project has been automating the cre- beige representing rippled sand; and lime green and red repre- ation of large explorable 3D reconstructions and data process- senting xenophyophores (a large, single cell organism). This ing – within a comparable timeframe to the data acquisition. data could then be queried. For example, a selected image of

The process to mesh the strobed and laser images with ve- coral could be used to identify similar images. The results of hicle navigation data has been largely automated, using the such a query showed that the corals were most densely distrib- relative position between the camera poses and the bathym- uted in rings around the base of the mounds; a crown rather etry, to generate depth maps corresponding to each strobe il- than a cap. A separate query of an image showing xenophyo- luminated image frame (having already calibrated the stereo phores – a recognised Vulnerable Marine Ecosystem indicator camera after assembly, before an expedition). The images are species – showed strong correlation in the tails of the mounds. then colour corrected, using the depth maps and images, and One of the goals for the BioCam project was to enable the then reprojected on to the bathymetry mesh, creating explor- data it gathers to be easily disseminated to the broader scienti? c able 3D visual reconstructions. community during an ongoing expedition. A web-based open-

rithms that automatically group similar looking patches of the

To make this easy to understand, the images that are most rep- The Darwin Mounds survey showed the ability to survey a resentative of each group are tagged to the maps, and a user can large area quickly, but also to quantify the distribution of spe- use any image as a query, to generate maps of sea? oor regions cies over that area – in an equivalent timescale. Potential uses that look similar to the query image. Furthermore, the global for this capability are already emerging, such as surveying sea- community of experts are able to participate in this process ? oor ecology around decommissioned sites in the North Sea or through online labelling platforms and use of standard formats. surveying areas for natural gas or CO2 leaks. What’s more, this

BioCam was put to the test onboard the NOC’s Autosub6000 could be done without the need for a crewed research vessel on during a cruise over the Darwin Mounds. Tens of thousands hand, with shore based launch and recovery. The next steps for of stereo pair images were taken with an average coverage BioCam include the possibility of real-time, in situ image pro- rate of ~16,000 m2/h (not including the overlaps needed to cessing and remote awareness of this processed information. www.marinetechnologynews.com 49