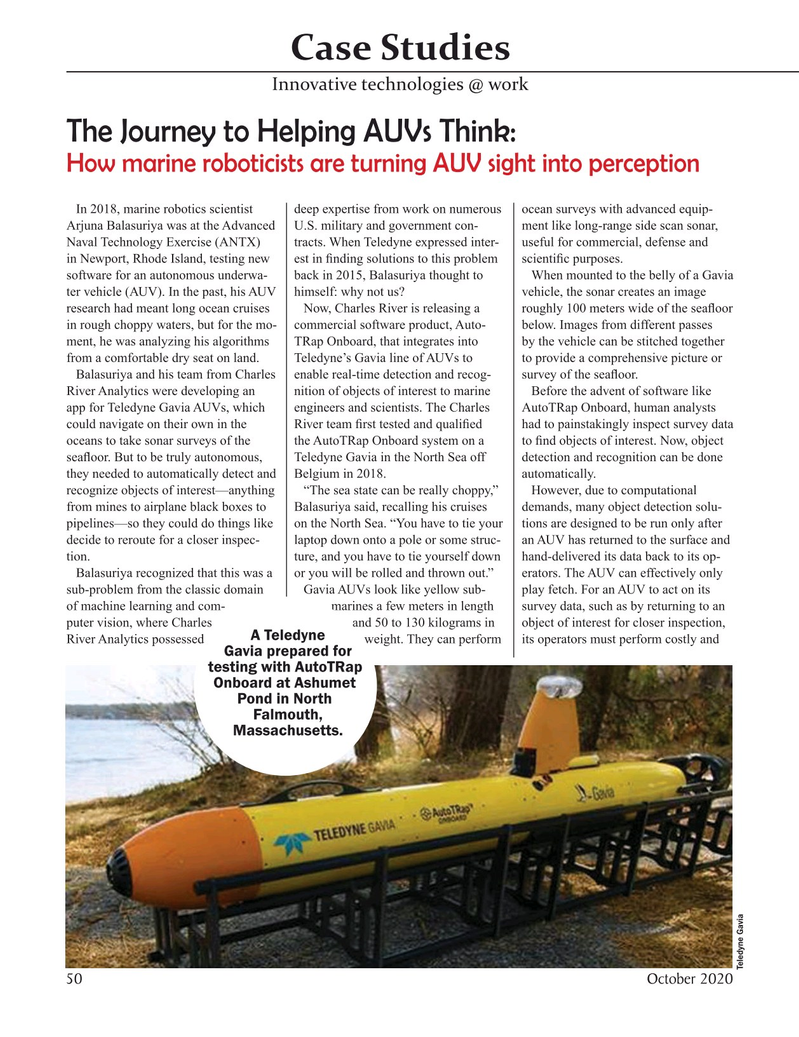 The Journey to Helping AUVs Think:

How marine roboticists are turning AUV sight into perception

Arjuna Balasuriya was at the Advanced U.S. military and government con- ment like long-range side scan sonar,

Naval Technology Exercise (ANTX) tracts. When Teledyne expressed inter- useful for commercial, defense and in Newport, Rhode Island, testing new est in ? nding solutions to this problem scienti? c purposes. software for an autonomous underwa- back in 2015, Balasuriya thought to When mounted to the belly of a Gavia ter vehicle (AUV). In the past, his AUV himself: why not us? vehicle, the sonar creates an image research had meant long ocean cruises Now, Charles River is releasing a roughly 100 meters wide of the sea? oor in rough choppy waters, but for the mo- commercial software product, Auto- below. Images from different passes ment, he was analyzing his algorithms TRap Onboard, that integrates into by the vehicle can be stitched together from a comfortable dry seat on land. Teledyne’s Gavia line of AUVs to to provide a comprehensive picture or

Balasuriya and his team from Charles enable real-time detection and recog- survey of the sea? oor.

River Analytics were developing an nition of objects of interest to marine Before the advent of software like app for Teledyne Gavia AUVs, which engineers and scientists. The Charles AutoTRap Onboard, human analysts could navigate on their own in the River team ? rst tested and quali? ed had to painstakingly inspect survey data oceans to take sonar surveys of the the AutoTRap Onboard system on a to ? nd objects of interest. Now, object sea? oor. But to be truly autonomous, Teledyne Gavia in the North Sea off detection and recognition can be done they needed to automatically detect and Belgium in 2018. automatically. recognize objects of interest—anything “The sea state can be really choppy,” However, due to computational from mines to airplane black boxes to Balasuriya said, recalling his cruises demands, many object detection solu- pipelines—so they could do things like on the North Sea. “You have to tie your tions are designed to be run only after decide to reroute for a closer inspec- laptop down onto a pole or some struc- an AUV has returned to the surface and tion. ture, and you have to tie yourself down hand-delivered its data back to its op-

Balasuriya recognized that this was a or you will be rolled and thrown out.” erators. The AUV can effectively only sub-problem from the classic domain Gavia AUVs look like yellow sub- play fetch. For an AUV to act on its of machine learning and com- marines a few meters in length survey data, such as by returning to an puter vision, where Charles and 50 to 130 kilograms in object of interest for closer inspection,

River Analytics possessed weight. They can perform its operators must perform costly and

Gavia prepared for testing with AutoTRap