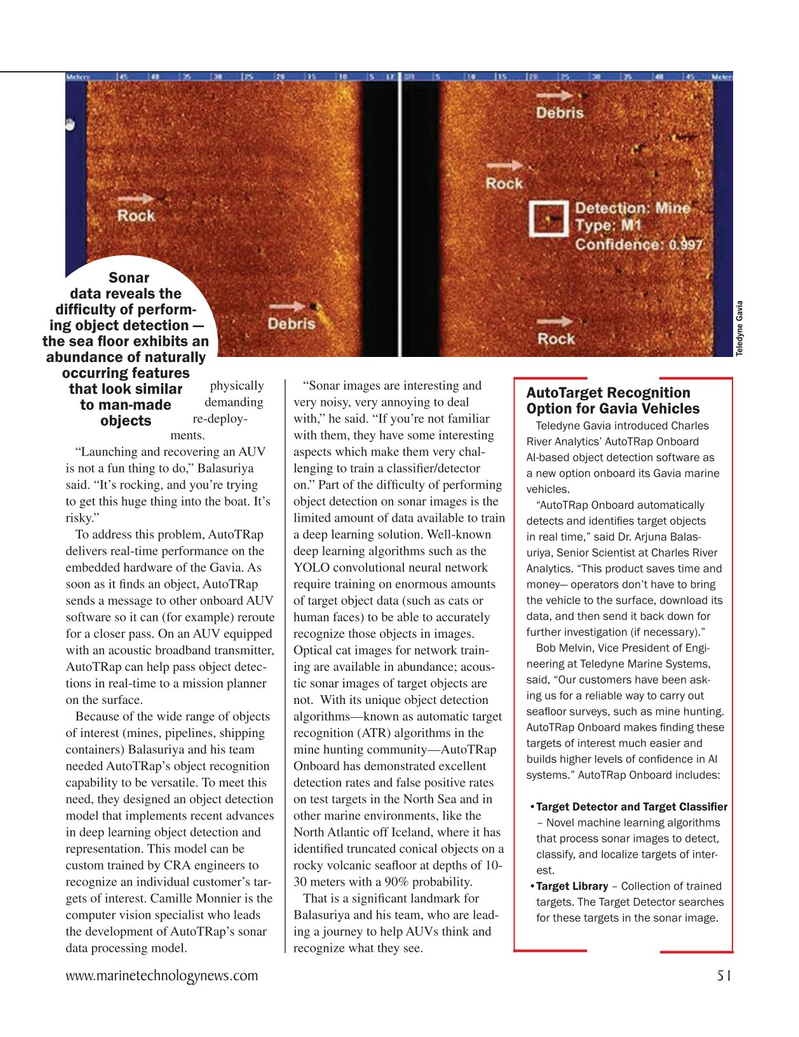 Option for Gavia Vehicles re-deploy- with,” he said. “If you’re not familiar objects

Teledyne Gavia introduced Charles ments. with them, they have some interesting

AI-based object detection software as is not a fun thing to do,” Balasuriya lenging to train a classi? er/detector a new option onboard its Gavia marine said. “It’s rocking, and you’re trying on.” Part of the dif? culty of performing vehicles. to get this huge thing into the boat. It’s object detection on sonar images is the “AutoTRap Onboard automatically risky.” limited amount of data available to train detects and identi? es target objects

Analytics. “This product saves time and soon as it ? nds an object, AutoTRap require training on enormous amounts money— operators don’t have to bring the vehicle to the surface, download its sends a message to other onboard AUV of target object data (such as cats or data, and then send it back down for software so it can (for example) reroute human faces) to be able to accurately further investigation (if necessary).” for a closer pass. On an AUV equipped recognize those objects in images.

AutoTRap can help pass object detec- ing are available in abundance; acous- said, “Our customers have been ask- tions in real-time to a mission planner tic sonar images of target objects are ing us for a reliable way to carry out on the surface. not. With its unique object detection sea? oor surveys, such as mine hunting.

AutoTRap Onboard makes ? nding these of interest (mines, pipelines, shipping recognition (ATR) algorithms in the targets of interest much easier and containers) Balasuriya and his team mine hunting community—AutoTRap builds higher levels of con? dence in AI needed AutoTRap’s object recognition Onboard has demonstrated excellent systems.” AutoTRap Onboard includes: capability to be versatile. To meet this detection rates and false positive rates need, they designed an object detection on test targets in the North Sea and in • Target Detector and Target Classi? er model that implements recent advances other marine environments, like the – Novel machine learning algorithms in deep learning object detection and North Atlantic off Iceland, where it has that process sonar images to detect, representation. This model can be identi? ed truncated conical objects on a classify, and localize targets of inter- custom trained by CRA engineers to rocky volcanic sea? oor at depths of 10- est. recognize an individual customer’s tar- 30 meters with a 90% probability.

• Target Library – Collection of trained gets of interest. Camille Monnier is the That is a signi? cant landmark for targets. The Target Detector searches computer vision specialist who leads Balasuriya and his team, who are lead- for these targets in the sonar image.

the development of AutoTRap’s sonar ing a journey to help AUVs think and data processing model. recognize what they see.