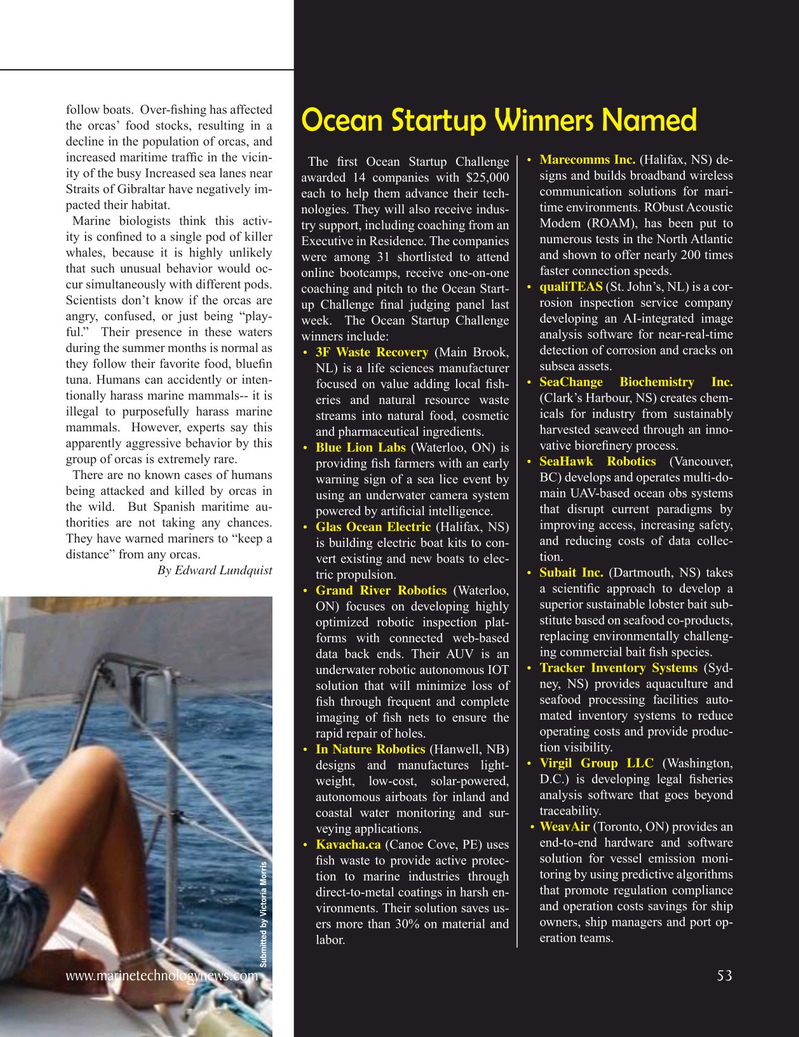 follow boats. Over-? shing has affected the orcas’ food stocks, resulting in a

Ocean Startup Winners Named decline in the population of orcas, and increased maritime traf? c in the vicin- •

Straits of Gibraltar have negatively im- communication solutions for mari- each to help them advance their tech- pacted their habitat.

Modem (ROAM), has been put to try support, including coaching from an ity is con? ned to a single pod of killer numerous tests in the North Atlantic

Executive in Residence. The companies whales, because it is highly unlikely and shown to offer nearly 200 times were among 31 shortlisted to attend that such unusual behavior would oc- faster connection speeds. online bootcamps, receive one-on-one cur simultaneously with different pods. • qualiTEAS (St. John’s, NL) is a cor- coaching and pitch to the Ocean Start-

Scientists don’t know if the orcas are rosion inspection service company up Challenge ? nal judging panel last angry, confused, or just being “play- developing an AI-integrated image week. The Ocean Startup Challenge ful.” Their presence in these waters analysis software for near-real-time winners include: during the summer months is normal as detection of corrosion and cracks on • 3F Waste Recovery (Main Brook, they follow their favorite food, blue? n subsea assets.

NL) is a life sciences manufacturer tuna. Humans can accidently or inten-

Blue Lion Labs (Waterloo, ON) is • group of orcas is extremely rare. •

There are no known cases of humans

BC) develops and operates multi-do- warning sign of a sea lice event by being attacked and killed by orcas in main UAV-based ocean obs systems using an underwater camera system the wild. But Spanish maritime au- that disrupt current paradigms by powered by arti? cial intelligence. thorities are not taking any chances. improving access, increasing safety,

They have warned mariners to “keep a and reducing costs of data collec- is building electric boat kits to con- distance” from any orcas.