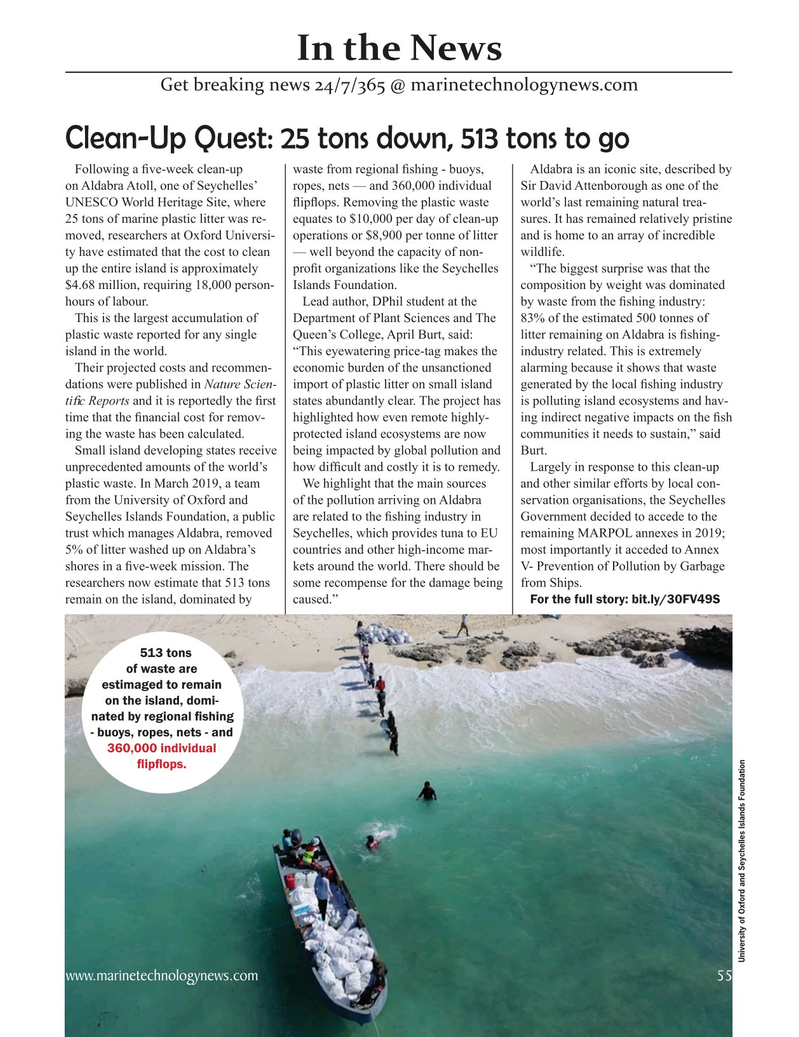 Following a ? ve-week clean-up waste from regional ? shing - buoys, Aldabra is an iconic site, described by on Aldabra Atoll, one of Seychelles’ ropes, nets — and 360,000 individual Sir David Attenborough as one of the

UNESCO World Heritage Site, where ? ip? ops. Removing the plastic waste world’s last remaining natural trea- 25 tons of marine plastic litter was re- equates to $10,000 per day of clean-up sures. It has remained relatively pristine moved, researchers at Oxford Universi- operations or $8,900 per tonne of litter and is home to an array of incredible ty have estimated that the cost to clean — well beyond the capacity of non- wildlife. up the entire island is approximately pro? t organizations like the Seychelles “The biggest surprise was that the $4.68 million, requiring 18,000 person- Islands Foundation. composition by weight was dominated hours of labour. Lead author, DPhil student at the by waste from the ? shing industry:

This is the largest accumulation of Department of Plant Sciences and The 83% of the estimated 500 tonnes of plastic waste reported for any single Queen’s College, April Burt, said: litter remaining on Aldabra is ? shing- island in the world. “This eyewatering price-tag makes the industry related. This is extremely

Their projected costs and recommen- economic burden of the unsanctioned alarming because it shows that waste dations were published in Nature Scien- import of plastic litter on small island generated by the local ? shing industry ti? c Reports and it is reportedly the ? rst states abundantly clear. The project has is polluting island ecosystems and hav- time that the ? nancial cost for remov- highlighted how even remote highly- ing indirect negative impacts on the ? sh ing the waste has been calculated. protected island ecosystems are now communities it needs to sustain,” said

Small island developing states receive being impacted by global pollution and Burt. unprecedented amounts of the world’s how dif? cult and costly it is to remedy. Largely in response to this clean-up plastic waste. In March 2019, a team We highlight that the main sources and other similar efforts by local con- from the University of Oxford and of the pollution arriving on Aldabra servation organisations, the Seychelles

Seychelles Islands Foundation, a public are related to the ? shing industry in Government decided to accede to the trust which manages Aldabra, removed Seychelles, which provides tuna to EU remaining MARPOL annexes in 2019; 5% of litter washed up on Aldabra’s countries and other high-income mar- most importantly it acceded to Annex shores in a ? ve-week mission. The kets around the world. There should be V- Prevention of Pollution by Garbage researchers now estimate that 513 tons some recompense for the damage being from Ships.