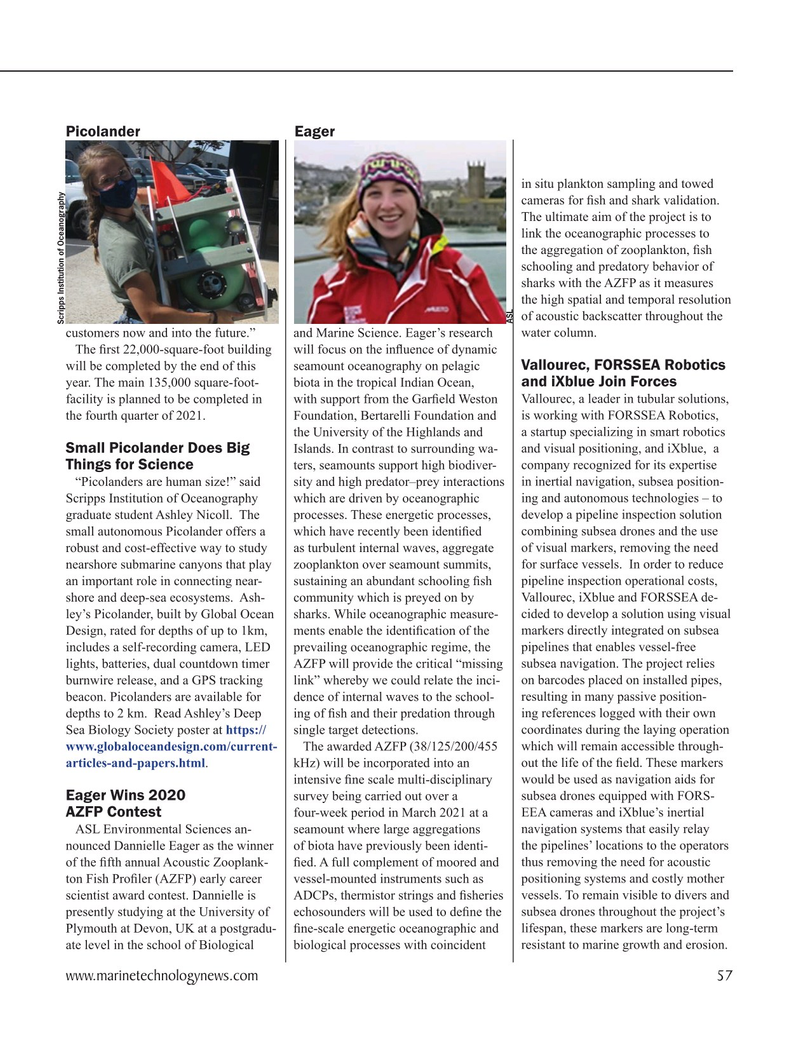 The ultimate aim of the project is to link the oceanographic processes to the aggregation of zooplankton, ? sh schooling and predatory behavior of sharks with the AZFP as it measures the high spatial and temporal resolution of acoustic backscatter throughout the

The ? rst 22,000-square-foot building will focus on the in? uence of dynamic

Vallourec, FORSSEA Robotics will be completed by the end of this seamount oceanography on pelagic and iXblue Join Forces year. The main 135,000 square-foot- biota in the tropical Indian Ocean, facility is planned to be completed in with support from the Gar? eld Weston Vallourec, a leader in tubular solutions, the fourth quarter of 2021. Foundation, Bertarelli Foundation and is working with FORSSEA Robotics, the University of the Highlands and a startup specializing in smart robotics

Islands. In contrast to surrounding wa- and visual positioning, and iXblue, a ters, seamounts support high biodiver- company recognized for its expertise

Scripps Institution of Oceanography which are driven by oceanographic ing and autonomous technologies – to graduate student Ashley Nicoll. The processes. These energetic processes, develop a pipeline inspection solution small autonomous Picolander offers a which have recently been identi? ed combining subsea drones and the use robust and cost-effective way to study as turbulent internal waves, aggregate of visual markers, removing the need nearshore submarine canyons that play zooplankton over seamount summits, for surface vessels. In order to reduce an important role in connecting near- sustaining an abundant schooling ? sh pipeline inspection operational costs, shore and deep-sea ecosystems. Ash- community which is preyed on by Vallourec, iXblue and FORSSEA de- ley’s Picolander, built by Global Ocean sharks. While oceanographic measure- cided to develop a solution using visual

Design, rated for depths of up to 1km, ments enable the identi? cation of the markers directly integrated on subsea includes a self-recording camera, LED prevailing oceanographic regime, the pipelines that enables vessel-free lights, batteries, dual countdown timer AZFP will provide the critical “missing subsea navigation. The project relies burnwire release, and a GPS tracking link” whereby we could relate the inci- on barcodes placed on installed pipes, beacon. Picolanders are available for dence of internal waves to the school- resulting in many passive position- depths to 2 km. Read Ashley’s Deep ing of ? sh and their predation through ing references logged with their own

Sea Biology Society poster at https:// single target detections. coordinates during the laying operation www.globaloceandesign.com/current- The awarded AZFP (38/125/200/455 which will remain accessible through- articles-and-papers.html. kHz) will be incorporated into an out the life of the ? eld. These markers intensive ? ne scale multi-disciplinary would be used as navigation aids for

ASL Environmental Sciences an- seamount where large aggregations navigation systems that easily relay nounced Dannielle Eager as the winner of biota have previously been identi- the pipelines’ locations to the operators of the ? fth annual Acoustic Zooplank- ? ed. A full complement of moored and thus removing the need for acoustic ton Fish Pro? ler (AZFP) early career vessel-mounted instruments such as positioning systems and costly mother scientist award contest. Dannielle is ADCPs, thermistor strings and ? sheries vessels. To remain visible to divers and presently studying at the University of echosounders will be used to de? ne the subsea drones throughout the project’s

Plymouth at Devon, UK at a postgradu- ? ne-scale energetic oceanographic and lifespan, these markers are long-term ate level in the school of Biological biological processes with coincident resistant to marine growth and erosion.