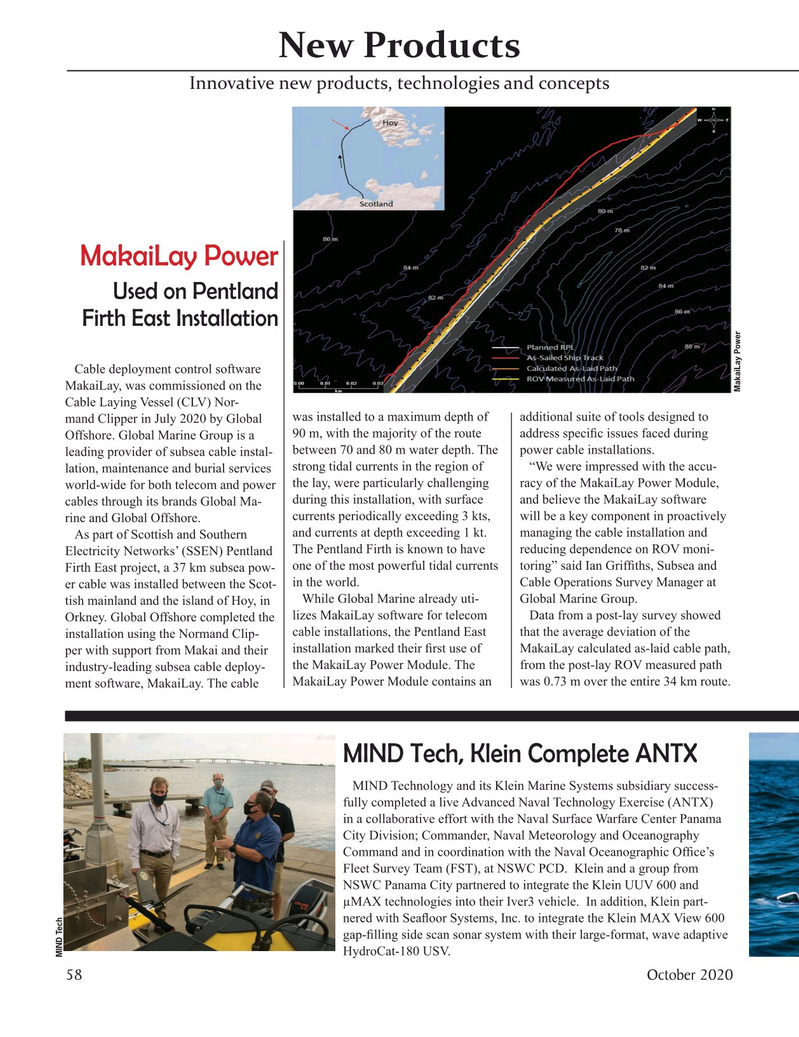 MakaiLay, was commissioned on the

Cable Laying Vessel (CLV) Nor- was installed to a maximum depth of additional suite of tools designed to mand Clipper in July 2020 by Global 90 m, with the majority of the route address speci? c issues faced during

Offshore. Global Marine Group is a between 70 and 80 m water depth. The power cable installations. leading provider of subsea cable instal- strong tidal currents in the region of “We were impressed with the accu- lation, maintenance and burial services the lay, were particularly challenging racy of the MakaiLay Power Module, world-wide for both telecom and power during this installation, with surface and believe the MakaiLay software cables through its brands Global Ma- currents periodically exceeding 3 kts, will be a key component in proactively rine and Global Offshore.

and currents at depth exceeding 1 kt. managing the cable installation and

As part of Scottish and Southern

Firth East project, a 37 km subsea pow- in the world. Cable Operations Survey Manager at er cable was installed between the Scot-

Orkney. Global Offshore completed the cable installations, the Pentland East that the average deviation of the installation using the Normand Clip- installation marked their ? rst use of MakaiLay calculated as-laid cable path, per with support from Makai and their the MakaiLay Power Module. The from the post-lay ROV measured path industry-leading subsea cable deploy-

MakaiLay Power Module contains an was 0.73 m over the entire 34 km route.

Command and in coordination with the Naval Oceanographic Of? ce’s

Fleet Survey Team (FST), at NSWC PCD. Klein and a group from