Back to the Drawing Board: Analyzing Social Impact of Sustainable Energy

The future could be bright for small island nations. Cheap sustainable energy is the core component of the United Nations Sustainable Development Goals.

Make no mistake about it. Money is nothing more than stored energy. We use money to get access to energy to support our life styles. While food uses sunlight to grow, the sunlight is only a tiny fraction of the energy it takes to get it into our mouths. Money is access to available energy, and available energy sustains our lifestyle. Cheap energy makes everything cheaper. Stealing money is stealing energy. Money hoarding is energy access hoarding. Equal access to energy is the core of a fair and just society.

And then there is another benefit. In the last 10,000 or so years the production of energy has trended towards larger and larger corporate and government conglomerates. Our politics, whether on the local, national, or global level, have been largely driven by who has access to energy and who has not. Hence Saudi royal wealth, US wealth, and Russian oligarchs. However, sun, wind, and waves are more equally distributed across the globe than readily accessible fossil fuels, can be directly harvested and are much more difficult to own or hoard. That means, not too long from now, the standard of living on small tropical island nations may increase more rapidly than the rate of improvement in first world countries. But make no mistake sustainable energy is a rising tide that will lift many more ships than we have been able to do so far.

On the individual level there is a further opportunity for change. Yes, we can buy our wind energy from large conglomerates and it will probably be quite cheap (My NJ elected energy supplier is a Texas wind farmer and their rate is lower than the standard utility rate). But if for any one reason I am not happy with the man, I can fight back. In the “old” days I could not drill my own oil well and refine the oil, but today I can find a piece of land and plant it with solar panels and, not too long from now, if I want transportable energy, I can collect the rain and turn it into hydrogen too. In other words, for the first time in thousands of years, our dependence on large corporate bodies will go down. That is, as long as there is a continued drive towards egalitarian humanitarian government.

Inherently, sustainable energy will raise our standard of living and while that may sound like fun, reality is little more complicated. The real question is: “Which standard of living?” If it allows a struggling underfed framer to live a little more like me, there is little to argue. But what about me? What would my raised standard of living look like? Bigger cars, bigger homes, more pointless travel, more sprawl, longer vacations at more luxurious resorts, more exotic foods and more debris generation?

Humans have always looked for energy. It is the way they survive and when excess energy becomes available they store it and, if there is no need to store it, they waste it. I know, because I carry about 40 pounds of excess stored energy around my waist, and don’t always close the flue in my chimney after I had a fire. So how do we control this urge? With fossil fuels the cost of energy may have provided a little restraint, but what will happen when available energy becomes an order of magnitude cheaper?

Don’t get me wrong, I am an engineer and that makes me an unlikely luddite, but an ounce of prevention today may prevent a pound of cure only a few years from now.

I know there are some relatively simple answers, but they need to become deeply ingrained in the human psyche as soon as possible. Too often we think “bigger is better”, but, with plentiful energy, we need to begin to think “as small as possible is actually more beautiful” and “efficiency is the real spice of life”. And here is where the engineers get to take center stage again. As engineers, let’s make “bigger” a dirty word and make energy efficiency, regardless of the cost of energy, our central driver.

It would start a virtuous cycle; if we focus on pure energy efficiency as our central design driver, less of our land and oceans needs to be covered with unnecessarily large homes, roads, solar panels, wind turbines, wave energy generators, pumped hydro storage, hydrogen converters, electric utility towers, hydro dams, hydro reservoirs, nuclear power plants and whatever other sustainable technologies we will be developing. And it will make the rising energy tide for all an even more powerful force.

For each column I write, MREN has agreed to make a small donation to an organization of my choice. For this column I nominate the National Marine Sanctuary Foundation https://marinesanctuary.org/the marine version of the National Park Foundation. We need the oceans to survive, but let’s leave them as untouched as we can. 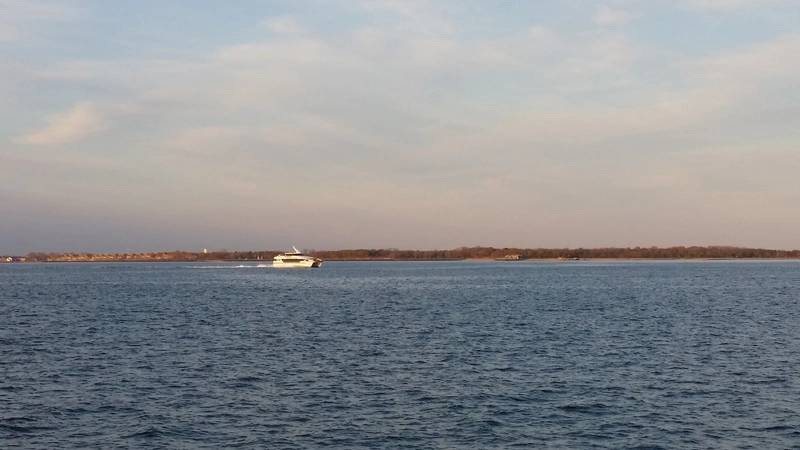 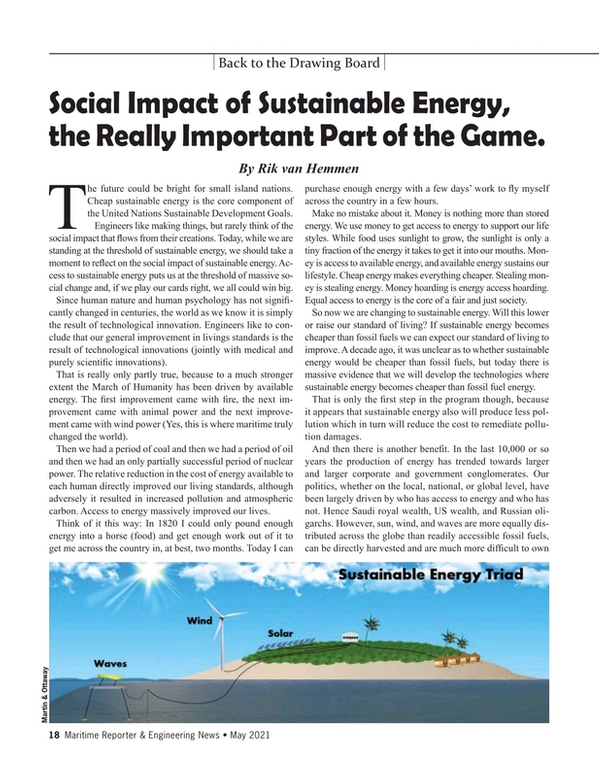 Read Back to the Drawing Board: Analyzing Social Impact of Sustainable Energy in Pdf, Flash or Html5 edition of May 2021 Maritime Reporter

Other stories from May 2021 issue