Read this page in Pdf, Flash or Html5 edition of May 2021 Maritime Reporter Magazine 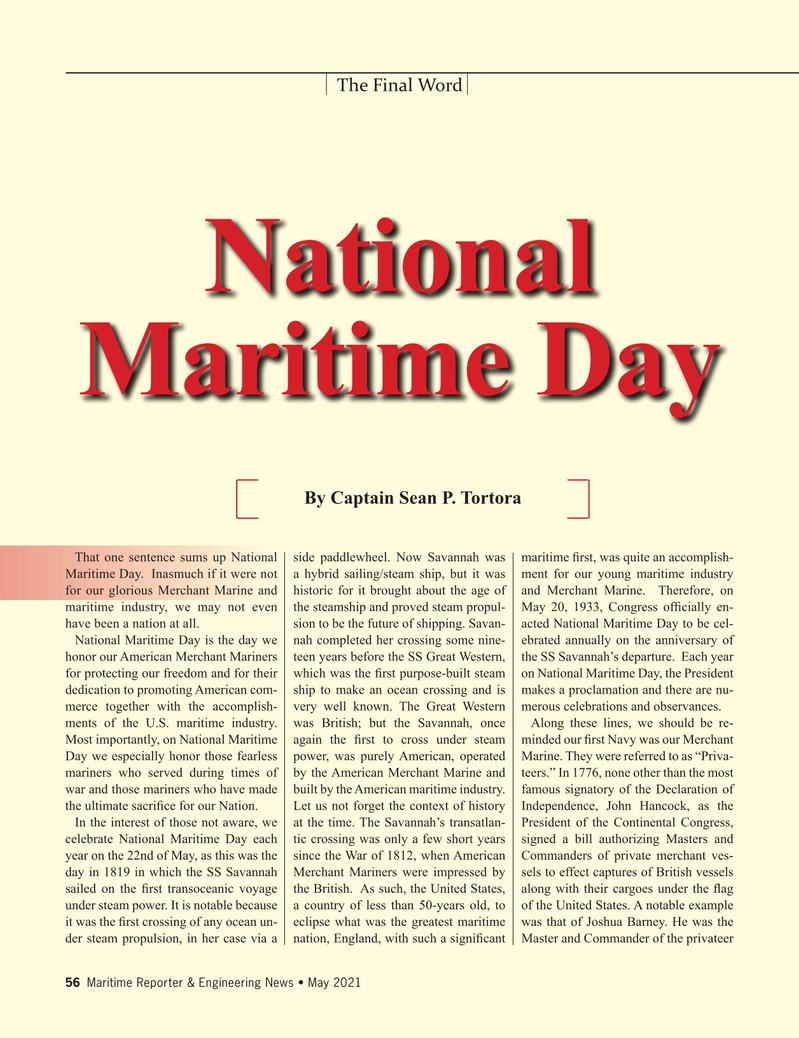 That one sentence sums up National side paddlewheel. Now Savannah was maritime frst, was quite an accomplish-

Maritime Day. Inasmuch if it were not a hybrid sailing/steam ship, but it was ment for our young maritime industry for our glorious Merchant Marine and historic for it brought about the age of and Merchant Marine. Therefore, on maritime industry, we may not even the steamship and proved steam propul- May 20, 1933, Congress offcially en- have been a nation at all. sion to be the future of shipping. Savan- acted National Maritime Day to be cel-

National Maritime Day is the day we nah completed her crossing some nine- ebrated annually on the anniversary of honor our American Merchant Mariners teen years before the SS Great Western, the SS Savannah’s departure. Each year for protecting our freedom and for their which was the frst purpose-built steam on National Maritime Day, the President dedication to promoting American com- ship to make an ocean crossing and is makes a proclamation and there are nu- merce together with the accomplish- very well known. The Great Western merous celebrations and observances. ments of the U.S. maritime industry. was British; but the Savannah, once Along these lines, we should be re-

Most importantly, on National Maritime again the frst to cross under steam minded our frst Navy was our Merchant

Day we especially honor those fearless power, was purely American, operated Marine. They were referred to as “Priva- mariners who served during times of by the American Merchant Marine and teers.” In 1776, none other than the most war and those mariners who have made built by the American maritime industry. famous signatory of the Declaration of the ultimate sacrifce for our Nation. Let us not forget the context of history Independence, John Hancock, as the

In the interest of those not aware, we at the time. The Savannah’s transatlan- President of the Continental Congress, celebrate National Maritime Day each tic crossing was only a few short years signed a bill authorizing Masters and year on the 22nd of May, as this was the since the War of 1812, when American Commanders of private merchant ves- day in 1819 in which the SS Savannah Merchant Mariners were impressed by sels to effect captures of British vessels sailed on the frst transoceanic voyage the British. As such, the United States, along with their cargoes under the fag under steam power. It is notable because a country of less than 50-years old, to of the United States. A notable example it was the frst crossing of any ocean un- eclipse what was the greatest maritime was that of Joshua Barney. He was the der steam propulsion, in her case via a nation, England, with such a signifcant Master and Commander of the privateer 56 Maritime Reporter & Engineering News • May 2021